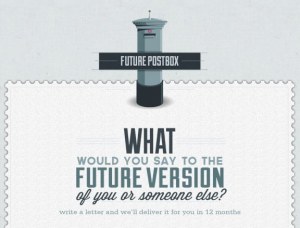 The following is a letter to myself that I’ll be sending using Future PostBox – if you haven’t had a look at it then I recommend you do. My mate Lee Crockford put it together and it’s a great tool for both personal and business use. At this time of the year I always start reflecting on the highs and lows of the past 12 months.

So it’s your birthday. You’re 23 today. Or when you open this letter you’ll actually be 24! Happy Birthday!

What a crazy year you’ve had. Then again every year for the past few years has been crazy. Full of highs and lows. Yet for every challenge that is sent your way you to seem to not only face it but thrive upon it.

The year started with a bang. You had an amazing opportunity to travel the world with someone who means the world to you and love dearly. Walking hand in hand you saw some of the most amazing sights you’ll ever see and have experiences that you will never forget. After having the privilege of travelling through Europe twice by yourself you thought countless times about how special it would be to see this sights with the girl of your dreams. She probably doesn’t realise how special this trip was to you.

Not content with just roaming the hills of Italy and the countryside of England to top the trip off you even managed to speak at a conference in London. This gave you the chance to meet with industry influencers in the recruitment and HR space from around the world and take your career to the next level.

After the excitement of January and February the following months were a really tough time. Family challenges reached an entirely new level. More responsibility was pushed your way. Work had usually been your release during times like this. Time to knuckle down and push to the next level. But your energy was being sapped by other avenues.

You also has the realisation that you were being limited by your current workplace and weren’t doing the best possible work. So you did what you do best, dug in and started to think about where your next opportunity could come from. Your hard work and dedication to personal development over the past few years meant you were ready to take up an exciting opportunity in a new space of digital marketing. Since taking this role in August you have thrived as you’ve had the ability to be a key decision maker and instigate change in a global organisation whilst still being able to balance all the other projects that you take on.

On a personal level you also reached a huge milestone this year. After living independently in Far North Queensland for two months in 2010 you set yourself the goal of leaving home in 2011. This was a tough decision as you felt your three younger brothers and single mother relied so heavily on your contribution (both financially and emotionally) and your support. But you knew that trying to be everything for everyone wasn’t sustainable any longer. So in July this year you moved out with one of your mates from school, you two couldn’t be anymore different but your differences make living together a laugh and quite easy.

For a long time you read a lot about young entrepreneurial types living their dreams and believed that organisations could generate profit whilst still working with a purpose beyond money and actually creating social change in the community. So I congratulate you on opening up your own consulting and speaking business whilst also volunteering as a social change entrepreneur. I know you didn’t think you’d have this opportunity to do all this great work so young but that’s no reason to feel guilty about the opportunities that have presented themselves because of your hard work and dedication. Feeling guilty will only hinder your chance to create real change in this world.

You’ve always had the ability to use your own inevitable death as a motivator for life. This was probably due to the fact that you attended far too many funerals in the first 15 years of your life and had to deal with the death of your best friend in primary school due to cancer. You read an article recently written by somebody who worked in palliative care about the top five regrets of the dying.

1. I wish I’d had the courage to live a life true to myself, not the life others expected of me.

3. I wish I’d had the courage to express my feelings.

4. I wish I had stayed in touch with my friends.

5. I wish that I had let myself be happier.

Over the past few months you have struggled with two of these regrets and you know exactly which ones they are.

So what are you going to do differently in 2012? I’m hoping that you took action and weren’t paralysed by change to ensure that when you open up this letter you can read it knowing that you have ticked all five of those boxes in 2012.

Good luck and don’t forget that I’m proud of you.